I came into contact with the advocacy service when a colleague from work passed on the details of the organisation to me. I was working for a mental health team and a former service user had begun to stalk me. This involved multiple phone calls and a deluge of emails with inappropriate content, frequent complaints to my manager as well as the person presenting at my workplace at times when I would usually be arriving and leaving, following me into the car park and photographing my car. This continued even after the police has been informed and had stated that it must not continue. Measures were put in place so that I travelled to work with a colleague and used a different entrance but this was not sustainable. The police were again involved and indicated that the person would be charged with stalking. I found the whole situation extremely distressing and felt scared and vulnerable. I was signed off from work with stress and was later informed that the person who was stalking me had gone to the home of someone with a similar name to mine believing it was where I lived.

When my advocate first contacted me I was feeling extremely vulnerable and anxious and was having frequent thoughts that the person would find me. Several times during this period I believed that the person was in my house, in the back of the car when I was driving or following me in another vehicle. My advocate replied to my initial email the same afternoon that it was sent and arranged to speak on the phone the following day. I don’t recall much about the first phone call but I remember feeling that I was not alone and reassured that I now had practical advice and specialist support to begin to deal with the situation. We arranged to meet in person the following week and she made a great deal of effort to find a location where I would feel as safe as possible, I remember feeling very scared and curling up on a sofa and holding cushions tightly for support whilst we spoke. My advocate helped me to understand some of the feelings that I was experiencing, gave me information about stalking behaviour which helped me to process what was happening as well as strategies to get me through the next few days. 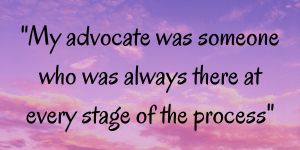 One of the main feelings that I had at this time was of being alone and isolated from other people. Despite having a caring partner, close friends and supportive work colleagues I found it difficult to talk about the situation or seek help with it as I struggled to make sense of it. My advocate was someone who was always there at every stage of the process and this helped me to feel less alone. She encouraged me to prepare things to say to work colleagues and friends which helped me to be around people rather than avoiding them as it could feel too painful to hear or talk about the situation or to deal with the emotions that this provoked in others.

My advocate worked with me to identify the support that I needed. As well as ongoing emotional support and acceptance, we developed safety plans and she helped me plan to return to work. Furthermore, she accompanied me on a visit to the courtroom prior to the trial date. I particularly struggled with decision making during this period and she helped me to understand my decision making style and how to encourage this and explore all options. She also helped me to look after my own health and on 2 occasions encouraged me to seek support from my GP when I was unable to recognise that my anxiety and trauma symptoms needed to be addressed.

My case went to the CPS and a decision was made to start legal proceedings. This was a really challenging time for me as I experienced a sense of conflict in being involved with the legal process against someone who I had met through work and my role had been to offer support with mental health difficulties. My advocate was particularly skilled at helping me to separate my feelings. She also provided reassurance when I went through periods of questioning my own actions and feeling that I was an unskilled practitioner and had made mistakes which led to the stalking behaviour.

The police were really supportive, but work shifts and deal with many cases so it was not always possible to speak to an officer dealing with my situation. Whereas I was always able to contact my advocate who could liaise with them on my behalf. I found that I was very sensitive to the way that I was given information as I found the situation so distressing. It was particularly difficult when speaking to the court or witness care team as I had not had the opportunity to build up a relationship with them. My advocate was able to provide information, that was at times difficult for me to hear, in a way that I could deal with and so I arranged that she was the main contact for me. She was also able to liaise with the security team at my organisation or anyone else if I felt unable to do so as she understood that at times the situation became overwhelming and it was helpful to have a break.

She had many different suggestions of techniques that may help, I found visualisation particularly useful. We also talked about managing my expectations about how I was dealing with the situation, at times I put pressure on myself. I worked in mental health and felt that I should be able to cope and also that I did not want to add to the pressure on my colleagues by having time off sick. We had an agreement that some days just getting through the day was enough, and I still use this now.

She was also able to normalise my feelings by giving me information about typical reactions in certain situations. A recent example is that I still feel very wary about sharing my contact details in a context that is far removed from the situation. Knowing that others who have been through similar situations feel the same way helps me to rationalise the feeling and gives me confidence that it will lessen over time. 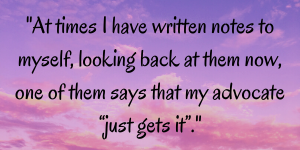 During this time I have tried many different approaches to help me to manage the situation. I had regular sessions with a counsellor, met with a homeopath and use yoga to help to deal with the excess adrenaline that anxiety produces. All these things have been really helpful but the one service that I could not have done without is advocacy. At times I have written notes to myself, looking back at them now, one of them says that my advocate “just gets it”. I struggled with low mood at times during the process and wrote gratitude lists to help to find positivity, my number one was that my advocate was on my side and believed in me.

I did not get the outcome that I would have liked or I think was right, but my advocate helped me to reconcile myself to accept this and find ways to concentrate on my future and leave the stalker in the past. There are many problems with the legal process, I think particularly when the person who has been charged with stalking has mental health issues. It is difficult to affect change but ensuring that all victims have access to advocacy ensures that they have support to deal with the process. This process can be really difficult and at times bewildering to be involved in, particularly if you have had no previous involvement with the court process.

I have found it very difficult to put into words how much my advocate has helped me, as she has empowered me to deal with situations that I would previously not have thought possible. When I think about everything I have been through I know that I would not have been able to do it without her.

Want to know more about our stalking service?