We are delighted to welcome the fantastic, funny and fabulous Mr Joe Wells as our new patron.

After working with Joe last year at the White Ribbon Comedy Night, we’ve been looking for a way to get him involved with Aurora New Dawn ever since – and now we have!

Joe is a stand-up comedian, writer and speaker whose career began when his first book, ‘Touch and Go Joe’ – a memoir about childhood OCD – was published. He now focuses on his unique brand of political comedy.

Although Joe never fails to make us laugh, he’s unquestionably serious about the issue of violence against women, with misogyny and discrimination frequently appearing as targets of his razor-sharp wit during his stand-up shows.

Here’s Joe doing what he does best for Amnesty International.

You can also check out the fabulous Mr Wells (though not in a library book kinda way) AND show solidarity for victims and survivors of violence and abuse at Brighton’s Stand-Up to End Violence Against Women in December.

And here’s what everyone else is saying about Joe:

“Joe Wells is a skilled jokesmith who threads great gags through intelligent political material that, whilst razor-sharp, is never particularly angry or dark. As the first gross gags open up into smarter, topical ones it’s clear that this is a tightly-structured, well thought-out set. Excellent jokes and sly political comment wrapped tightly in a Western union online neat parcel which delivers regular, powerful laughs from a delighted audience. He spins new life out of easy targets like bankers and the BNP with some wonderful imagery” British Comedy Guide

“A much-needed voice against hypocrisy as well as a wonderfully talented stand-up comedian, Joe Wells uses his comedy to burst a gigantic hole in the sides of homophobia, misogyny and racism while still managing to remain funny throughout” Portsmouth Evening News 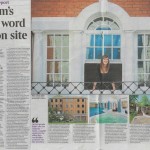 We were delighted to see Aurora New…

See all of Writer in Residence's articles — 45 total