Home » By and for women

“I don’t trust men; you were the first female I had spoken to in months as all other support offered to me had been men. They all said my behaviour was provocative and they couldn’t help if I didn’t open up.”

By Women for Women

For women’s history month we wanted to celebrate the ‘by and for women’ approach replicated across our sector, and we certainly aren’t unusual in providing female only staff and services in the anti-male violence movement. As referenced in our statement on our website the legacy of the ‘by and for women’ approach was a baton passed to us by second wave feminists of the 1960s and 1970s, whose activism resulted in the types of services we provide today.

We are, as always, grateful to our sisters at nia, who very kindly allowed us to replicate their prioritising women policy and have led the way more recently as a public voice for the retention of female only spaces and services for women who have been subjected to male violence.

Our work at Aurora is guided by the collective fight to end all forms of male violence against women and in doing this work we are unequivocal in our support of single sex spaces for female victims.

The legislation that enables organisations like Aurora to provide female only staff and services is enshrined within the Equality Act 2010[1] (EA2010). Generally, the EA2010 does not allow for discrimination against any of the nine protected characteristics , however, there are exceptions in certain circumstances[2]. The relevant protections for women experiencing male violence remain within the protected characteristic of sex and involve the use of single sex exceptions which allow the protection of women-only spaces and staff:

There is a plethora of research to support the use of ‘by and for women’ support for female victims of male violence. Some of our recommendations include:

This report utilises 687 responses from our qualitative evaluation surveys completed with victims and survivors in the past nine months. Although each service has different questions relating to funding outcomes and or service provision, every evaluation asks victims their preference or views of female only staff or service provision.

In all our one-to-one services we are open to anyone, no matter their sex, or how they identify. However, because the vast majority of our beneficiaries are female, we apply the occupational requirement in the Schedule 9 part 1 of the Equality Act[5] and employ only women for all services. We also run our Athena courses which are women only groups for victims and survivors, where we apply schedule 3 part 7 of the Equality Act[6] providing a woman only group space for victims and survivors.

Within our one-to-one advocacy and support services: 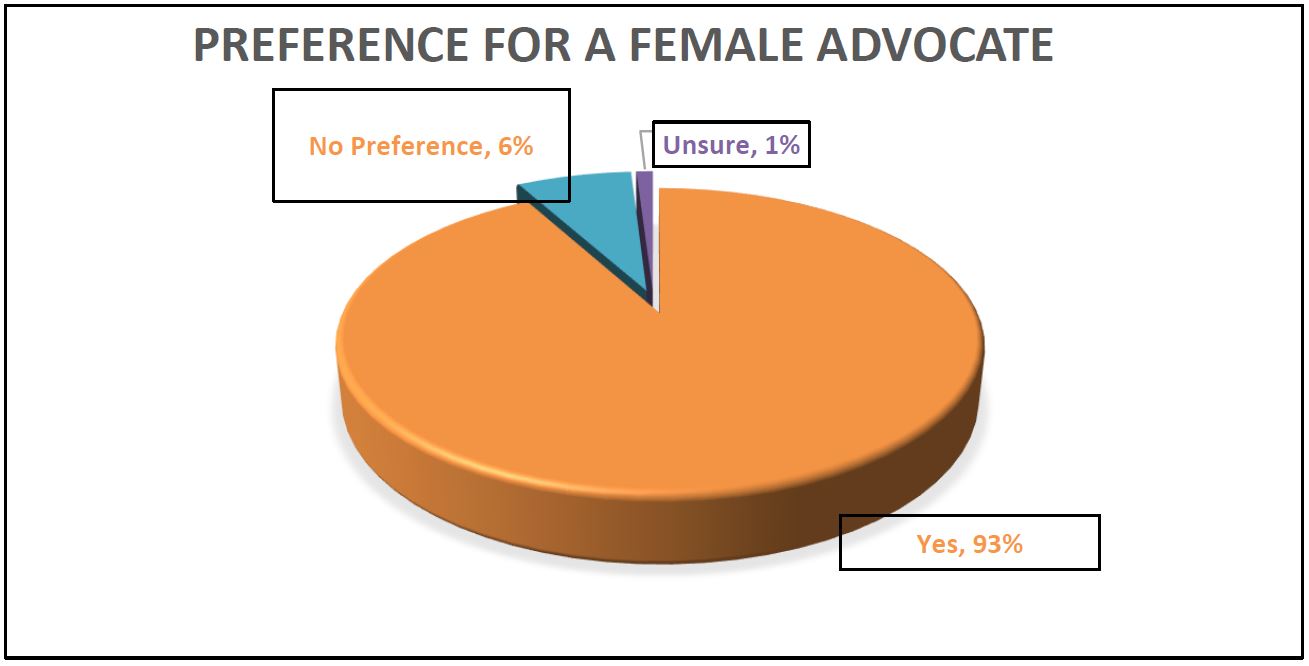 Broken down further between women and men the findings were as follows: 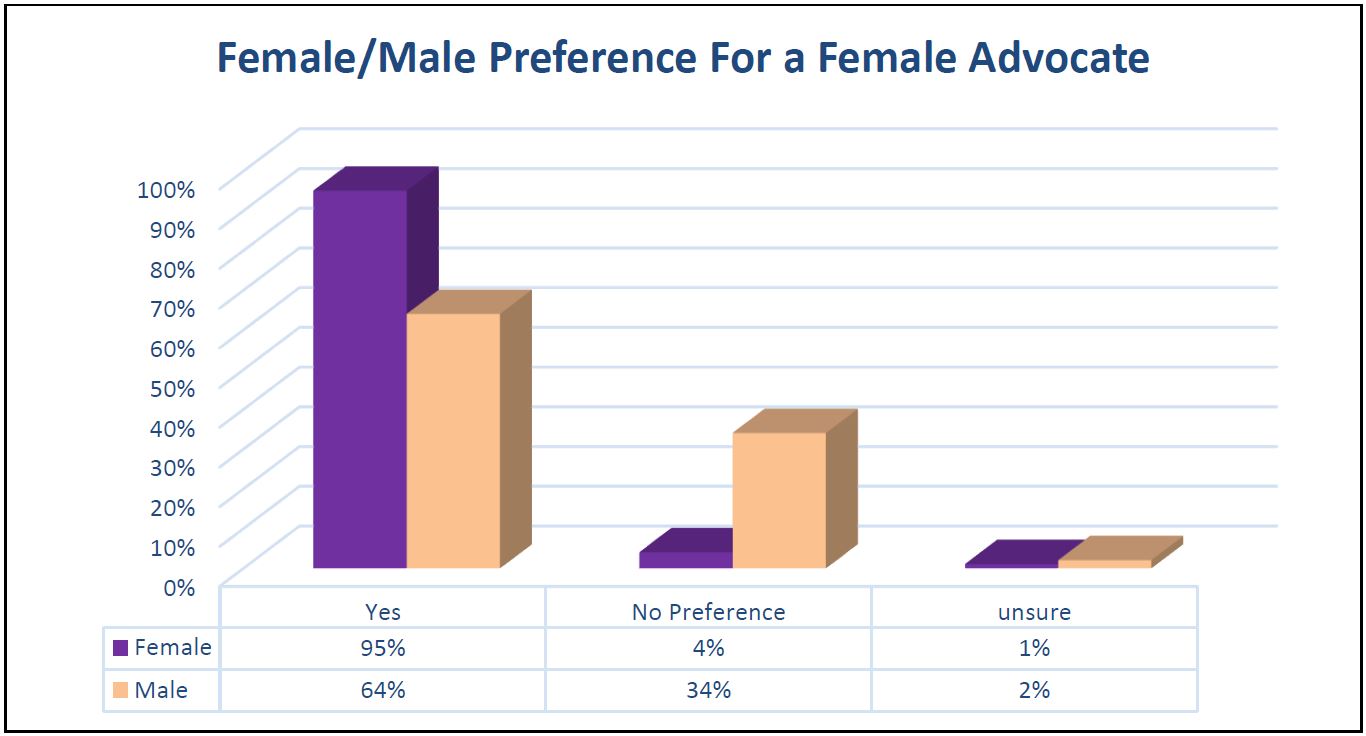 Victims reported a female being their first responder was important to them:

Trauma-informed services understand how violence and abuse impacts on the lives of those they are supporting and integrate this knowledge into every element of their service delivery. At Aurora, the values underpinning our services are as important to us as our service delivery. As an organisation whose core business is providing support to victims and survivors of domestic abuse, sexual violence, and stalking, we recognise the pervasiveness of male violence against women and the ways in which women can be left feeling invisible or disempowered in male-dominated settings. We are committed to consulting with victims and survivors routinely and to involving them in the co-design of our services. Our clients tell us that a mixed-sex environment would act as a barrier to them accessing support in the first place and feeling able to engage with that support in the longer-term. We would not be a truly trauma-informed service if we failed to listen to their feedback.

Many victims come to our services having been subjected to different forms of male violence throughout their lives. Their trust of men has been shattered from a very early age and working with men would be another layer of trauma for them:

Self-Selecting out of service provision:

Some victims told us they would have self-selected out of our service provision if they were expected to work with a man:

Women are socialised to be undemanding, apologetic and compliant. When a woman has been subjected to male violence the impact of the abuse means that she is even less likely to feel confident to speak up for herself and assert her needs and rights. Part of the work that Aurora undertakes with victims and survivors is to increase self-esteem and self-worth, sometimes that takes years. Amongst the feedback from victims, we noticed that some were even apologetic to us in their desire to have female only spaces and services. Some women also reported experiencing support from men in other services and not feeling happy or comfortable with it.

This provides us with evidence that although female services are a legal right, some women feel guilty and even apologetic for asserting that right. In our view this places the onus us as an organisation to offer ‘by and for women’ support at point of entry – rather than expect a women to have to ask for women only provision, at a point in their lives where they are in a heightened state of trauma, and their self-esteem is low.

Victims with no preference:

7% of victims overall stated they had no preference on the sex of their advocate.

However, within the data under no preference, victims still noted they were more comfortable with women:

Victims recognised that even though they may not have a preference they understood that for others a female would be the preferred choice, especially depending on what issues they were presenting with or dealing with at the time:

Victims who were unsure of their preference

Only 1% of victims said they were unsure of their preference of the sex of their advocate. But the findings were consistent with victims who stated they had no preference, with many reporting that they felt more comfortable with women:

Male victims are in the minority of our service users, but their feedback on this provision is important and valuable to note. 64% of male victims said they preferred a female advocate, 34% stated they had no preference and 2% said they were unsure:

100% of women accessing our groups wanted them to remain single sex. Their testimonies are powerful to acknowledge:

As a charity we are answerable to our beneficiaries. It is important that we co-design and deliver our services in response to their needs. The data gathered from our beneficiaries evidences full support of our ‘by and for women’ approach. The overwhelming majority of victim/survivors (92%) want a female advocate and 100% of victims accessing our women’s groups want to retain this as a female only provision.

Notably, the preference from male victims is to have a female advocate (64%), this may be for a number of reasons, as stated many of the men felt more able to open up about their experiences to women but it is also worth noting that the majority of our male clients have also been abused by men, both as children and as adults. Therefore, the perpetrator demographic largely remains the same, and their experiences of the trauma of being subjected to male violence remain similar to that of our female clients.
Perhaps some of the most valuable data comes from the victims who state they had no preference or were unsure about the need to have a female advocate (7%). Although many said they didn’t mind, the majority did note they felt more comfortable with women. Most helpfully a large number noted that although they had no preference, they recognised that many victims would have a preference, and a need, for a woman only environment. No victims stated they wanted a male advocate.

It is our beneficiaries who are asking for our ‘by and for women’ model, a number of women stated they would not have used our services at all if we did not provide them with a female only environment, this is entirely understandable given the trauma they have suffered through male violence. Crucially the small number of victims who had no preference would not seek to prevent the right and need for a female only space for the many victims and survivors who do have that preference.

If you would like to support the Aurora New Dawn charity and you are able to donate you can do so here:

If you would like to support our female only group work and you are able to donate you can do so here: